21 castles to visit in Hampshire

From wooden motte and bailey structures to great stone fortresses and Tudor artillery forts, Hampshire’s castles are bursting with stories and secrets

This is the place to start your castle tour, for Portchester reflects both the antiquity and evolution that can lie behind fortification, a medieval castle built within the precincts of a Roman fort.

Here is perhaps the best-surviving Roman fort in England, one of the famed ‘Saxon Shore Forts’ of the late-3rd century AD, a nine-acre square that lay abandoned until an Augustinian priory was founded in the 1130s, with Henry I adding the stone keep in the opposite corner.

The castle was favoured by royalty, with Henry V, Margaret of Anjou (Henry VI’s queen), and Elizabeth I among them. Portchester also served as a prison during the Napoleonic Wars. I particularly like the story, possibly apocryphal, of a senior officer’s steed that was stolen and eaten by French internees. 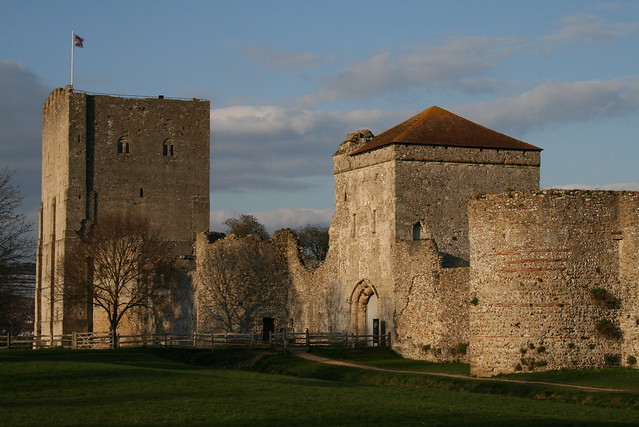 It’s often claimed that Winchester was an Anglo-Saxon capital, and with that importance you’d expect it to be capable of defending itself. It was a Saxon fortified burh, then a pair of castles came along.

North-west of the cathedral was one, which saw action during the 12th century civil war (the ‘Anarchy’) of rival claimants to the English throne, Stephen and Matilda. The Great Hall, a magnificent 13th century aisled hall, houses ‘King Arthur’s Round Table’. It’s definitely round but has nothing to do with a real Arthur.

Also, east of the cathedral lie the ruins of Bishop Henry of Blois’ Norman castle, Wolvesey, the residence of the medieval Bishops of Winchester, which hosted Queen Mary I and Philip of Spain in 1554, and was destroyed during the English Civil War. 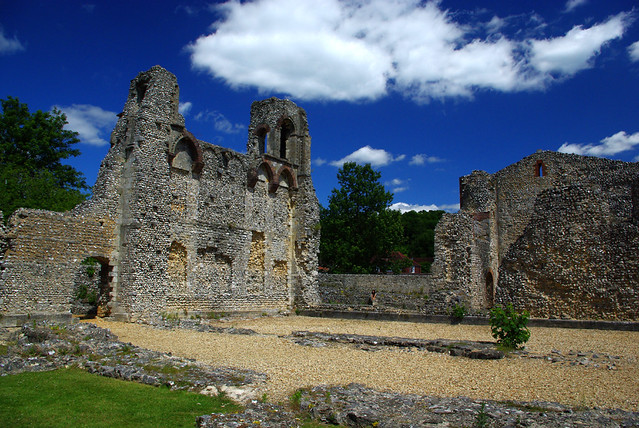 At Odiham, a gallant force of a baker’s dozen held out for a fortnight against the French, who’d come over to support the barons, offering an alternative king into the bargain.

The castle sits on the Basingstoke Canal, which it predates, at North Warnborough and, whilst ruined, does possess a rare octagonal keep. John built the castle as a handy stopover when travelling between Windsor and Winchester. By the end of Elizabeth I’s reign, the castle was a ruin. 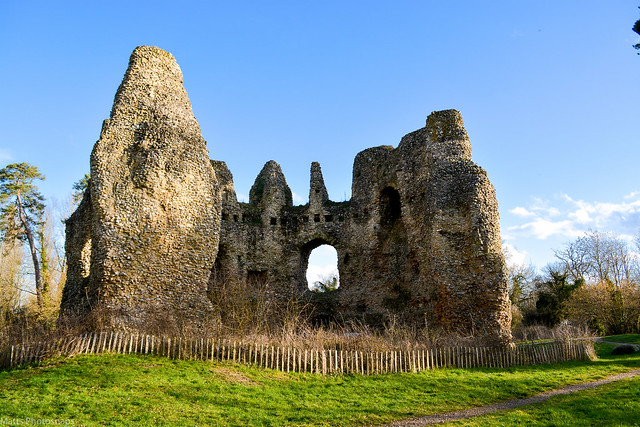 On to the Isle of Wight, and Carisbrooke, another fortress to see action during the 12th century Anarchy (1135-53). Further fisticuffs occurred in the late-14th century when the French attacked, but were repulsed by Carisbrooke’s constable, Sir Hugh Constable (‘Constable Constable’).

The castle’s most famous inmate was Charles I, imprisoned here during the English Civil War. He arrived in November 1647, tried (and failed) to escape, and was then, after a year, shipped off to Hurst.

Two of the king’s children, Elizabeth and Henry, lived at Carisbrooke after the king’s execution. The well, with its donkey wheel, is an attraction, whilst the Princess Beatrice Garden recalls the last royal resident, the youngest daughter of Queen Victoria. 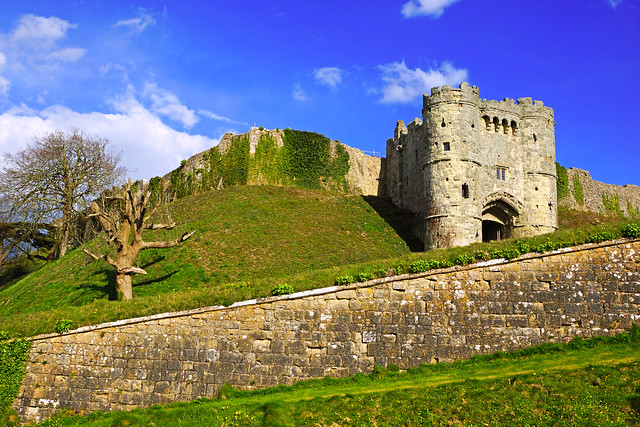 It makes sense to visit Hurst after Carisbrooke, as indeed did the doomed Charles I. Sited as the end of a shingle spit, Hurst was completed in 1544, late in the reign of Henry VIII, as we land firmly in the era of the artillery fort, the successor to the true medieval castle.

Hurst would remain bristling with armament until WW2 when it was an anti-aircraft battery. The biggest of Henry’s Solent forts, Hurst welcomed Charles I over November-December 1648, as he headed inexorably towards his denouement in London (January 1649).

He was probably quite relieved to depart Hurst where his room was apparently only eight foot by 4½. The castle later benefited from its own narrow-gauge railway for shifting shells about. 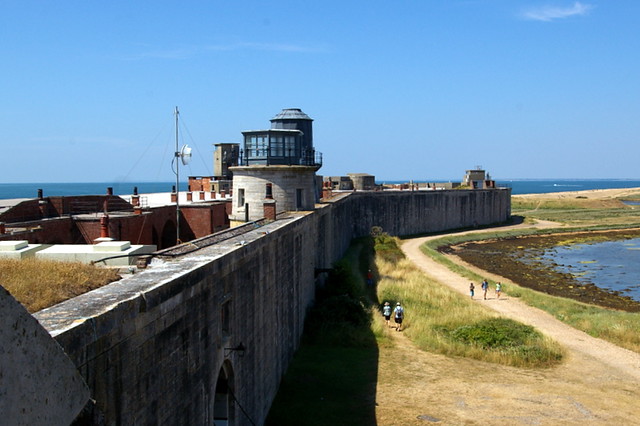 Still with Henry VIII, Calshot was another fort erected during his reign (1539-40). Again, on the end of a spit, the fort was a smaller blockhouse, and was designed to defend the entrance to Southampton’s harbour.

You’ll be greeted by a round tower and platform with a surrounding gun terrace complete with embrasures (apertures to poke those guns out of). The fort was more recently used as a Navy and RAF base and Calshot is synonymous with the story of flying boats, with the airbase hosting the famous Schneider Trophy seaplane races.

With the increasing obsolescence of military flying boats, the base was closed in 1961. The fort is a well-preserved example of the Henrician-era fort, built to safeguard the coast against foreign invasion. 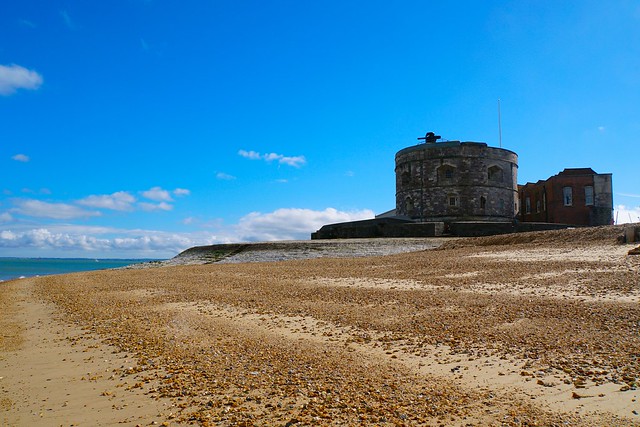 Back on the Isle of Wight for another of Henry VIII’s forts, Yarmouth Castle lies behind the George Hotel, and was built in 1547, another in the chain of forts designed to protect our coastline against foreign incursion.

Yarmouth differs from the earlier circular forts, such as Hurst, as it is square with an arrow-head bastion on its landward side. During the English Civil War, the castle was held for Parliament and remained an operational castle until the late-19th century, being brought back into commission during the two world wars.

There’s a menacing looking naval gun atop the platform, still scanning the distant horizon in case of an enemy encroachment. It still rests on traversing rails, used to swing it around. 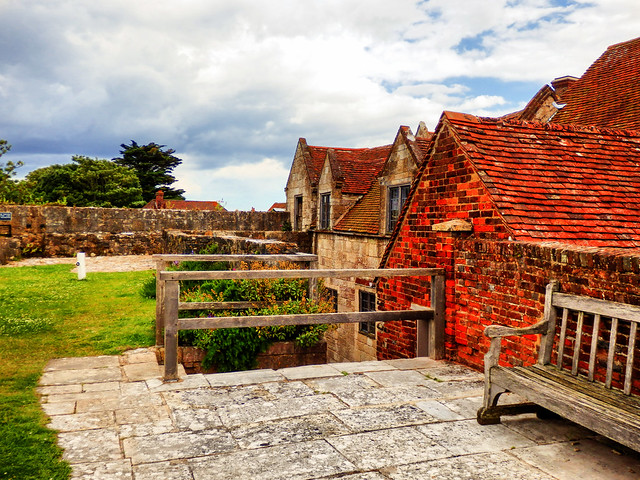 I’ve left one of the best until last, as Southsea is undoubtedly one of Hampshire’s most interesting castles. Built over 1543-44 by Henry VIII, Southsea benefited from a square keep within a diamond.

The castle very quickly saw action (1545) when the French invaded the Isle of Wight and the king himself was at Southsea to see his flagship, the Mary Rose, go down on 19th July.

The castle surrendered to Parliament without a shot being fired in anger in the early stages of the English Civil War (1642) then suffered a calamity in the mid-18th century when an explosion in a powder store resulted in the deaths of 17 people. Southsea was another fort that would see its working life extended into both world wars. 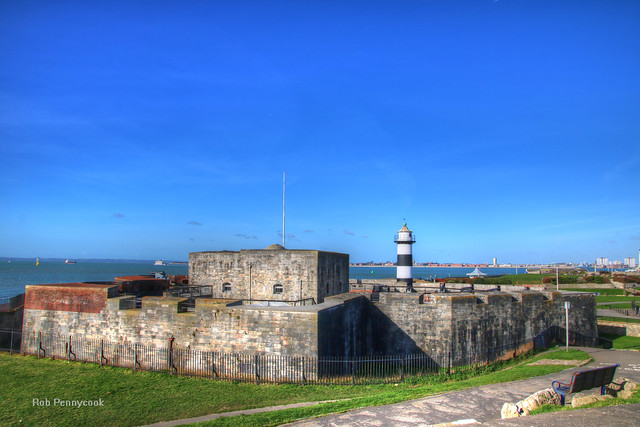 Portsmouth’s Sea Forts - Lord Palmerston built a series of forts to protect the naval base from French attack.

Southampton Castle - Had a bailey of three acres. Part of the bailey wall remains, including the town walls.

Ashley – The remains of a motte and bailey castle near the church in Stockbridge.

Bishop’s Waltham – A moated residence converted to a palace and slighted during the English Civil War.

Merdon – A castle built c.1138, but destroyed in 1155. Richard Cromwell lived nearby at Hursley.

Netley – Henry VIII built this fort near the abbey, it became a private house in 1627.

Titchfield – After the dissolution of the monasteries, Titchfield Abbey was converted into a fortified mansion.

How starting prep school early sets children up for success

WATCH: 16 retro videos looking back at Hampshire’s times gone by

Hampshire walk around Oakley and Deane

WIN a set of chilli sauces from Dr Trouble