Portrait of Emily Davies by Rudolph Lehmann. 1880, when Emily would have been aged around 50

So, I’ve kicked off ‘Hampshire Greats’ with two women, authoress Olivia Manning and nursing pioneer Florence Nightingale. Here’s a third lady for you, Sarah Emily Davies (1830-1921), who was a feminist and suffragist.

Born in Southampton, at 6 Carlton Crescent on 22nd April 1830, Emily was actually christened Sarah Emily Davies, but is known to us as ‘Emily’. The young lady would achieve fame as the co-founder of Girton College, Cambridge, with Sussex-born Barbara Bodichon (1827-91), coincidentally a cousin of Nightingale, and would become an early mistress of that very first women’s college in Cambridge.

That building where Emily was born is a noble white edifice replete with blue plaque (which, incidentally, was erroneously placed on 8 Carlton Crescent when it was erected in 1994).

The subject of that plaque, Emily would go on to become not only a feminist and suffragist of the first order, but also a pioneer in campaigning for women’s rights in education, for example, highlighting the unfairness and inequity of not opening up universities to women. All of these causes were frowned upon at the time Emily espoused them.

Watercolour of Girton College, Cambridge, by the architect Alfred Waterhouse

Emily was the daughter of a schoolteacher and evangelical philosopher clergyman, the Welsh-born John D. Davies, who’d moved to Southampton in 1827 to open a school. If 6 Carlton Crescent tells us one thing, it’s that this was a well-to-do family, although much of Emily’s growing up would be spent, not here, but up in the north-east of England, where her father had taken up duties as a rector.

Her Dad had attended Cambridge himself, beginning his studies there a decade before Emily was born, and was also a published author. That love of learning was passed on to his little girl who considered a career in medicine, numbering Elizabeth Garrett Anderson (1836-1917), the first woman to qualify as a physician/surgeon, among her friends.

What kind of a youngster was she? Apparently, she enjoyed playing at politics, which I doubt many kids do today. She also liked to make the news (literally) by producing her own weekly papers, all written in narrow columns, imitating the real thing. Emily’s ‘paper’ was the ‘Herald’. It’s fair to say that her childish aspirations of writing the news would be writ large in adulthood.

Suffragists and suffragettes? Davies and Anderson were both suffragists, the original peaceable campaigners for women’s rights, including female suffrage (the vote). The suffragettes, frustrated at the lack of progress, would be the splinter group that advocated militancy.

Emily Davies, an avowed suffragist, did not approve of the militant methods of the Pankhursts and made her feelings known. She was a conservative (small ‘c’), although that didn’t prevent her taking part in a mass demo in her late-70s!

After her father died in 1861, Emily, now aged 30-odd, moved back south, to London, where she became editor of the ‘English Woman’s Journal’ and struck up those influential friendships with Bodichon, Garrett Anderson and the latter’s younger sister, Millicent Fawcett (1847-1929), the suffragist who’d lead the peaceful National Union of Women’s Suffrage Societies (NUWSS) for over 20 years.

READ MORE: Did you know Florence Nightingale was raised in Hampshire?

It wasn’t just about the vote though and Emily’s speciality would soon prove to be education. To say this was neglected as far as women were concerned would be a gross understatement. Whilst there were some girls’ schools come the mid-19th century, there were hardly any properly-trained women teachers, it was impossible to sit for a university conducted exam and the notion of women reading for degrees was considered, well, improper as well as laughable.

Emily and her friends had to break down a male-dominated bastion which dictated that education for women would lead to them losing their natural ‘charm’.

Emily Davies House is a Halls of Residence at Solent University, Southampton

If ‘Votes for Women’ was to be accepted it had to go hand-in-hand with access to education. Emily became an active member of the London School Board (1870-73), which became the capital’s largest educational provider, and used this platform to agitate for London degrees for women, which were granted in 1874.

It wasn’t just London that she had in her sights though, but also the stellar universities of Oxford and Cambridge, which had been closed shops as far as the UK’s women were concerned.

Emily campaigned as the secretary of a committee for girls to have access to Cambridge Local Examinations (an aspiration that was duly granted in 1865 when 91 female students were permitted to enter), but this was just a stepping stone to a bigger target, the right of women to reside at a University site.

Davies then helped found Girton’s predecessor, the ‘College for Women at Benslow House’, which was established at Hitchin, Hertfordshire, in 1869 which then became Girton College, Cambridge in October 1873. Emily would serve as one of the college’s early Mistresses (1873-75) then as Secretary of Girton between 1882 and 1904.

Girton College, Cambridge in the 1890s, a quarter century or so after it was established by Emily Davies and Barbara Bodichon

Although Girton is one of the 31 constituent colleges of Cambridge University, it’s main site, set in 33 acres of land, is actually around 2½ miles outside the city, on the outskirts of the village of the same name. Comprised of rather typical Victorian red-brick, it was mostly the design of Victorian Gothic Revival architect Alfred Waterhouse (1830-1905), who we can assume must have met Emily on many occasions.

In 1948, over a quarter of a century after Emily’s death, Girton finally achieved full college status, which meant that women were officially admitted to the University. Emily would probably have been looking down approvingly, but possibly also querying why it had taken so long. I’m sure she would have been solidly behind the next development, which saw Girton become Cambridge’s first co-ed college in 1976.

Emily’s mark on Southampton was not restricted to her birthplace and that plaque, which resides on the correct building today. She was also the inspiration behind the naming of a Solent University hall of residence on Western Esplanade, Emily Davies House.

It was entirely apt, of course, that the connection should be made between Emily and Southampton’s University, whose campus and six residences lie right in the heart of the city centre. 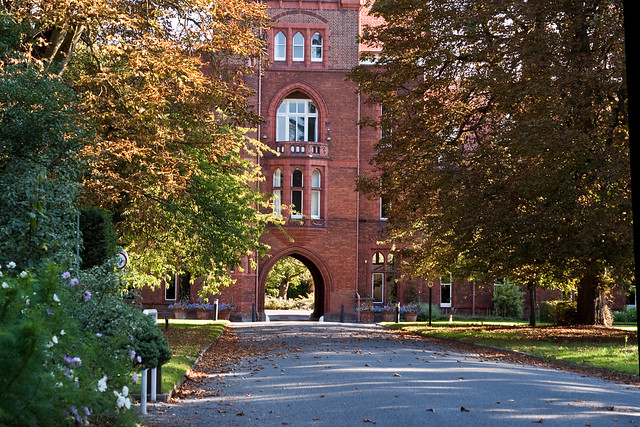 I’m sure that Emily would have been thrilled to see a University in her home city, especially as a healthy number of its 11,000 students will be women.